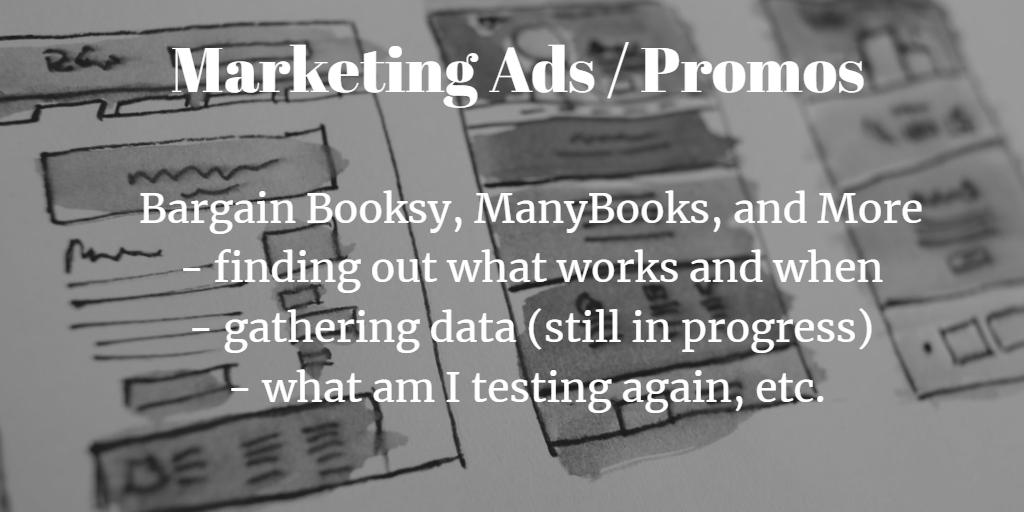 Obviously, putting one after another or even multiple ads on the same day should widen your visibility. However, not all promotions are the same. While I’ve found previous success with larger ads (i.e. BookBub) or the blog tour if I’m aiming for reviews, my move from publish-focused to marketing-focused requires a bit more experimentation.

This weekend, I ran a sale on my first book, High Summons. It is a young adult urban fantasy and the first in a series with four available. The more your book varies from that general line, the less I can assure you’ll have the same results, so take this with a grain of salt.

I picked a Friday-Sunday (close-out early Monday) for the weekend reader rush. Sunday is my best sale day generally, but I can scattered ranges throughout the week.

ManyBooks ran on Saturday. Six sales were confirmed to be in connection. Though I got a discounted price ($19), HIGH SUMMONS isn’t on Kindle Unlimited (KU), so I couldn’t get the usual 70% of royalties.

Meaning? ManyBooks did not pay off for me. However, it does obviously work. Would use again for something on KU. Overall, loss of $17. Definitely spent more and gotten less.

I’ve sent them an email for details about ad clicks. When I know, I’ll share.

Bargain Booksy ran Sunday. I’ve gotten mixed results with Bargain Booksy. I picked Young Adult. Generally, I go with fantasy, but I noticed YA was $25 to Fantasy’s $40. $15 doesn’t break the bank, but Fantasy has been hit or miss, so I thought I’d stray to YA since Horror had been consistently not worth it. Also, Horror has almost 20K less subscribers, so…odds on?

As far as I can tell – no direct sales from Bargain Booksy. I’ve reached out to see if they’ll send me the data on clicks. Expect an update when that comes in!

Free Ads are rarely something I stress about. If they work, great. If not – most aren’t time consuming. However, bookoftheday.org was super easy and quick. I had the ad up same day. I can’t be certain on the flow as I had another sale started earlier in the day (Bargain Booksy), but within a few minutes of posting, I saw 3 sales. Again, no way to know this is direct, but it took 2 minutes to do, so I’m planning on testing this out on its own at a later date.

Social Media posts were entirely on Sunday. I spread promo posts in 10 groups on Facebook focused on Urban Fantasy, YA books, Kindle books, and e-book sales. Joining these groups is a good idea. If nothing else, good way to get ideas for new promotions. Even better, great way to network.

If you haven’t already, creating a newsletter or mail list is a good idea. Check out my simple form here!