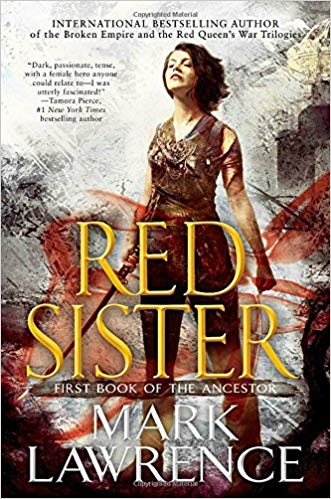 While I’ve followed Mark Lawrence on Twitter, I actually hadn’t read anything he’d written, but my brother recently picked up this book (and subsequently powered through the city). He hasn’t stopped talking about it since, so when I needed a book for a flight, I picked up Red Sister, and here we are.

Overall, Lawrence creates an interesting world with diverse characters. The majority of which are women, and he does so far better than many male authors. Though there was a certain event which motivated Nona, the injustice and her rage on behalf of her friend spans the entirety of the book. It isn’t simply motivation. Friendship forges the core of the book, and it’s beautiful.

Powerful women, protecting each other and teaching girls to become powerful women – realistic in the helping and hindering which goes on between these wonderfully multi-dimensional characters. Every character has motives. They each have weaknesses which make psychological sense and hint at backstory information before Lawrence even shares it with the reader. I loved it.

First, you would not believe the internet wormhole if you try to find an easy copy/paste half star. People beg for it. Nobody has a decent one.

Second, whoever edited this book failed. Dozens of missing or misused commas and several awkward clauses resulted in me putting this book down and rereading when I got back home. I seriously thought my exhaustion made me think there were more errors than there were. Weirdly, the first few chapters are the worst comma-wise. Most of the time, these pages are overly edited. It stunned me.

I’ve noticed Penguin Random House’s imprints (especially spec fic imprints) don’t do the best at editing. I suspect they focus their efforts on the main line (or Candlewick, which is generally higher quality editing), but there’s a lot of freelancing going on in publishing. As a freelance editor in my spare time, I both applaud the use of freelancers and worry about how much cost-cutting is the focus of doing so. If you’re not willing to pay a full-time editor more than $40K a year, I wouldn’t be shocked to see a freelancer getting not even a quarter of that to do twice the projects in a quarter of the time. Not the best idea.

I’m curious if the editing issues will remain in the second book in the series, and Lawrence weaves an interesting story, so I suppose we’ll see. Definitely a suggested read – especially if you find commas superfluous anyway.